You need Atlanta video production resources. Good thing we have spent the last two decades learning the ins and outs of producing in Atlanta. We use our 20 years of learning every day to be more effective for ourselves and our clients.

It wasn’t glamorous getting our experience. It involved long days, heavy workloads and sore backs. But the dividends have been huge. Knowledge that makes us an asset to our clients. 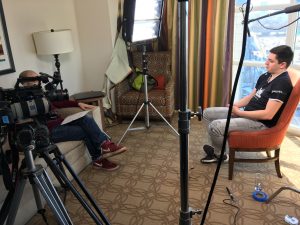 These are just some of the questions that people have when producing in Atlanta and Georgia. We’ve seen a lot of things working in this city. Many of which can never mention online. If you’re new to Atlanta or just new to producing and need some help on your next project, feel free to reach out and let us set you up for success. We’re happy to answer questions about how we can not just get your production of the ground but help you make it great.

Producing cheap video is no way to live or market your brand. But sometimes it’s unavoidable.

Doing it on the cheap isn’t anything we ever want to do but it’s almost unavoidable lately.  And if you’re an agency producer there’s really only three ways to get cheap video done.

1) Have really great concepts and a great blue chip client with a decent media buy.  Production companies with talent they’re looking to build will be happy to help you out. Send out great boards and you’ll get lots of callbacks. Crap boards and well, nothing.

2) Call in favors. Let’s hope you’ve got a few in the bank and are loyal to the people you work with. We in the production business are constantly called upon for favors. We also know that promises of future work should be taken with a grain of salt by people we don’t have a track record with.

3) Think outside the box. Typically agency producers have two buckets they go to. High-end bi-costal prod cos. Or low end corporate flunkies with a track record of putting out the predictable. One is a no go and two leaves no one happy. (This is also when the Creative Director says, why don’t I just shoot the damn thing.)

It’s important to know what it is that costs so damn much to produce high-quality film and video. Sure, the cameras, lights and audio gear are expensive, but the line item that actually kills a line producer is labor.  It’s also the same thing that kills agency revenues and while we’ve all been asked to do so much more since the crash.

On a big budget union set there are things you just can’t ask people to do – just ask a teamster to move a c-stand one day. On an indie production folks are willing to chip in and wear multiple hats or go without an assistant. What it takes is a creative eye in managing budgets and people. And it also helps having experience working with less.

Need some help maximizing your production budget. Just reach out to us and help you make the most of you cheap video shoot.

The Alliance Theatre needed a television commercial shoot to market their most high-profile production of the season, Barry Manilow and Bruce Sussman’s, Harmony. A -list talent only has so much time, so we worked fast and produced this spot and an electronic press kit in one shooting day.

Fluid services including scripting writing, line producing, shooting, editorial and finishing. It was a pleasure to work with the Alliance and Mr Manilow.

Would you like Fluid Films to produce your next commercial, just reach out to us here. Our producers have produced hundreds of spots for everyone from national brands with A-list talent to regional players with limited budgets. We’re experts and making the job great no matter the budget. 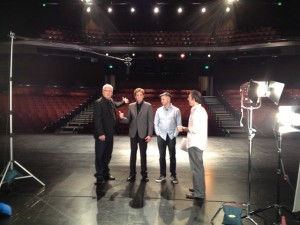 Actors talk with client on set of a television commercial shoot

By all accounts, Peter Jackson’s Hobbit has been a remarkable event similar to that of Avatar. It introduced new state-of-art techniques that have turned a blockbuster opening into a worldwide cultural event. Kudos to Mr. Jackson.

As a producer of content for commercials, branded content, marketing and even indie films, will this affect you?  If you are thinking of using some of this new technology there are a couple things you need to keep in mind. The technology, the expense and your audience.

Technology
Mr Jackson was breaking new ground with The Hobbit but he was using off the shelf camera systems from Red that had merely been customized to shoot in a 3D rig. For all intensive purposes, if you had the money, we could have a similar setup working on your project next week. However, we’ll need to bring in a 3D expert on set to make sure your cameras are functioning accurately for 3D and that the effects will render properly. Also the higher frame rate will require more light since the cameras are working twice as fast.

Expense
Shooting two cameras at once for 3D means twice as much data. Shooting twice as fast means twice as much data again. Shooting at 5K means more than twice as much data again. Data storage has gotten cheaper as of late but it also becomes a manpower issue. All this data must be checked and backed up continuously. This will mean a significant expense for your production. And we also mentioned previously that it will require more lighting. That will cost you too. Big lights cost big money. And we haven’t even gotten to post production yet – but as you can imagine, it will cost you.

Your Audience
For the time being, the only place someone can watch a Peter Jackson’s movie at 48fps in 3d is at a specially equipped movie theatre. And in 4K projection? Very few theaters. There are a lot of home televisions equipped with 3D technology. With the release of RedRay and some new televisions by Sony, we’re certainly going to see this high end of entertainment come to homes sooner than later. But how many people will have a 20K home theatre to watch this with? Not enough to warrant the increased cost except for the blockbuster filmmaker in the near term.

We should all keep our eyes on emerging technology too see how quickly it’s adapted by others and make our own decisions about when or if we should adapt it ourselves.